Here at Club OS, we’ve put together a team of exceptional individuals. They advance our business through professional excellence, they enrich our company culture through diverse backgrounds, and best of all, they make jokes -- mostly bad, but we love that. Every so often, we’ll be sitting down with team members for what we’re calling “Club OS Five-by-Fives.” The premise is simple: Five questions about the awesome work they do at Club OS and five questions about their lives outside of work, which we assume are just as awesome.

1.) How long have you been with Club OS, and what are your day-to-day duties?

I've been here… four and a half years. Wow, time flies! A typical day sees me working with our engineering team to coordinate efforts, testing new improvements and catching high-risk bugs so that our customers have the smoothest experience possible.

2.) What previous education or work experience do you have that helps you find success in your current position?

In terms of education, I'd have to say very little -- at least formally! I graduated with a History degree and a music minor. Technology has always been a passion of mine though, and I'm one that rarely leaves well enough alone. I've modified most of my personal electronics and, as you can imagine, this territory comes with a lot of troubleshooting and problem-solving. Previously, however, I have worked with other large CRMs and provided support and implementation for customers across all levels, from single-owner businesses to multi-location companies.

3.) What is regression testing, and how does it improve Club OS?

Regression testing is a step that all new features and fixes must go through before making their way to public release; this step is particularly important as it's performed in addition to standalone testing of each feature. Once everything in a release has been approved separately, we create a test environment that contains all changes in a single place. This allows us to ensure that everything plays nicely together and that a new change introduced in the code doesn't have any negative effects on an existing function or feature of Club OS.

4.)  How do you gauge success in quality assurance?

Success is gauged by user feedback after a release. As the old saying goes: no news is good news! This allows us to turn our focus to legacy features that were released prior to having proper quality assurance and improve every aspect of Club OS.

5.) You've recently started lending your voice to Club OS Help Desk videos. Why are the videos valuable, and where can they be found?

The value of videos cannot be overstated. I can’t tell you how many times I’ve been tinkering with a personal device and have had to turn to YouTube in order to find a detailed walkthrough of a particular process. While having written articles is very helpful too, they can still be cumbersome at times as they require your full attention. It can be likened to the recent boom in audiobook popularity. We may not all have time to sit down and read a novel, especially when it’s much more convenient to pop in some headphones and listen. Add some helpful visuals that reinforce the topics being discussed, and you’ll have digested the information in no time. If you’re ever interested in learning more about the system, or if you just want to bask in the dulcet tones of my pleasant voice, head over to help.club-os.com

1.) Outside of work, what hobbies or activities do you pursue?

I like to keep myself well rounded so I try to engage in many different activities. Of course, there is the typical "video games" answer but that's boring! I love making music, exercise, skateboarding, and believe it or not, yard work. I've felled a few trees recently and it's pretty invigorating! I also got my first project car not too long ago, so I'm taking my tinkering to a new level which has been an incredible learning process! 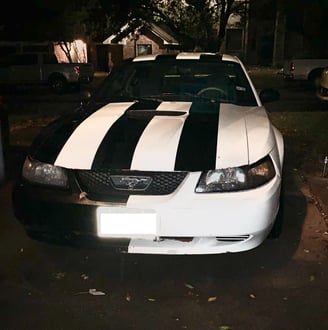 2.) You recently moved into your first home -- congrats again! What's your favorite part about homeownership?

Honestly, I answered that in the previous question -- I'm loving working outside and generally just having space for everything. If I had to distill it into a single idea though, I’d say that my favorite part is taking something that exists in a certain state, pouring yourself into it, and being able to enjoy and share the results.

3.) You and your fiancée are currently planning your wedding. What wedding-planning advice would you give newly engaged couples?

DON’T DO IT! Haha, I’m kidding, of course. This is a tough one to answer because it means such different things to each individual. I suppose the most encompassing piece of advice I can give is to not hesitate. Time moves a lot faster than we tend to think and it waits for no one! This is a big event for everyone, including the guests, so you’ll want to have your ducks in a row far before you think it’s necessary. 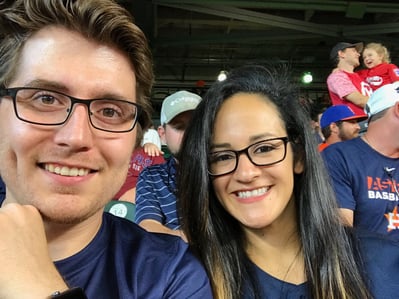 (Daniel and his fiancée, Shawntel, catching a Houston Astros game.)

4.) Would you rather live for free in your dream house but it's located in a town of under 200 people, or rent-free in a studio apartment in a major metropolitan city?

That depends on the day. Idealistically, I'd love to be in my dream house, but realistically I need human interaction. That's why I moved back to Austin, it's the best of both worlds!

5.)  If for the rest of your life, you could only listen to one album your favorite band produced, which album would it be?

How dare you. My favorite band is Weezer, for better or for worse, and their discography is so inconsistent it's hard to say… but if it's the REST of my life, I think I'd have to say that their 2016 White Album is the winner -- although that's so tough to put into writing. Again, how dare you.