Here at Club OS, we’ve put together a team of exceptional individuals. They better our business through professional excellence, they enrich our company culture through diverse backgrounds, and best of all, they make jokes -- mostly bad, but we love that. Every so often, we’ll be sitting down with team members for what we’re calling “Club OS Five-by-Fives.” The premise is simple: Five questions about the awesome work they do at Club OS and five questions about their lives outside of work, which we assume are just as awesome.

This week, we sat down with Club OS Founder and President, Adam Stokar.

1.) What year did you launch Club OS, and what was the original idea or goal of the company?

Technically, the company was formed in 2007 (called Technique Fitness).  The initial product was a workout tracker that allowed anyone to log their fitness routines on a tablet or phone instead of paper. After four years of struggling to find product / market fit, the company acquired a small software startup offering sales and marketing tools for health clubs. In 2011, we combined those products together and launched the first version of Club OS.

2.) What education and work experience helped you to found a company that blends fitness and tech?

I studied Information & Systems Engineering at Lehigh University, then obtained a Master's of Information Networking at Carnegie Mellon. In school, I learned how to build applications that could be deployed on the internet (web applications) and how to analyze business processes at a mathematical level in order to optimize their efficiency. Alongside studying, I played team sports and kept up a constant fitness regimen.  I’ve always enjoyed the challenge and competitiveness of exercising and pushing the body to uncomfortable limits.

3.) Can you point to a single achievement that you're most proud of in the history of Club OS?

Signing a deal with the largest gym franchise in the world. This validated that the company had something very valuable and confirmed the need for our product by companies of any shape and size in the health and fitness space.

4.) What feature or development are you most excited about in 2019?

Analytics. Club OS has a few different research projects underway to ensure we are able to provide leading-edge analytics for the modern business operation. This project will change the way people use and interact with Club OS, making it easier than ever for our users to figure out what actions to take next.

5.) You began work on the code which would eventually become Club OS in 2007. A lot of growth and change has happened in the 11 years since then. Where do you hope the company is at the end of the next 11 years?

In 11 years, Club OS will be globally known as a leader in health club business solutions. I want Club OS to be a requirement when gyms hire staff, similar to MS Excel or Word. You won't be able to run the most optimized, efficient fitness business without using Club OS.

1.) Outside of work, what hobbies or activities do you pursue?

In order of priority, 1) Being a dad to my two boys and husband to my incredible wife, 2) Exercise and nutrition, 3) Reading, 4) Daily Fantasy Football (I never win but like the strategy involved), 5) Video Games (Assassin's Creed, Madden, Fifa, GTA, and World of Warcraft if you go way back).

2.) What unique challenges do boys present from the perspective of a dad?

As one of three brothers growing up, it’s been an eye-opening experience raising boys of my own. Having kids has changed my perspective on many things, primarily how I spend my time each day. I have to be more aware of my activities at work and at home. Another challenge is context switching (also a challenge in programming) between running a business and being a dad. One example: Working from home, immediately after a management conference call, I had to quickly turn into Mr. Freeze and let my son, aka Batman, capture me and put me in jail.

3.) As a lifelong Pennsylvanian, what makes Philadelphia the perfect city to run your business and raise your family?

My parents are from New York, but I was born in Pittsburgh. I like to tell people that Philadelphia is the ideal mix of Pittsburgh and New York. It's very livable, meaning you can get in and out of the city quickly, and it's not too crowded (I really don't like big crowds). Conversely, Philly has a growing entrepreneurial scene, big tech companies, great restaurants and bars, and tons of exciting events like concerts and marathons. For my family, it's been the best of both worlds, which is why we've lived in the city for over 11 years.

4.) Your dad and your youngest brother are dermatologists, which practically makes it the family business. Did you ever consider becoming a dermatologist, too?

I started out as a chemistry major at Lehigh with the intention of becoming some type of doctor. After the second semester, I couldn't handle the three-hour labs and asked my guidance counselor to switch to something math-related. Thankfully, my youngest brother, now an official dermatologist, will keep the tradition of skin care "free samples" going for another generation.

5.) Your hometown is Pittsburgh so naturally, you're a die-hard Steelers fan. Let's say you could watch their next Super Bowl appearance from the sidelines with the team, but you were banned from watching any of their games until they actually make it to another Super Bowl. Would you take that deal?

As a fantasy football player, I'd be ok following games from the stat ticker. Watching the Super Bowl live, from the sidelines with Tomlin and AB next to me, would be a once-in-a-lifetime experience.  Yes, I'd take the deal. 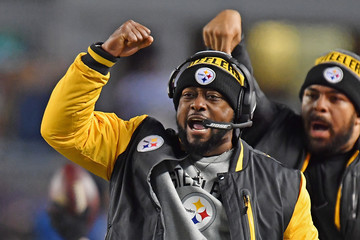